Notice: Lewis Ocean Bay Heritage Preserve some roads on the preserve are currently closed to vehicular traffic given recent heavy rains, use caution and do not drive through standing water, foot traffic is welcomed. 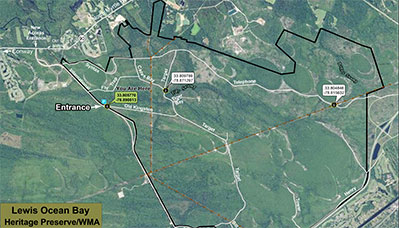 Minutes away from humming highways and the neon lights and manicured golf courses of Myrtle Beach, a natural wonderland and oasis flourish at Lewis Ocean Bay Heritage Preserve.

On this 10,427-acre preserve, you might spy animal tracks of deer, raccoon, fox, squirrel, quail and black bear, and, if you're lucky, catch a glimpse of these elusive animals. The preserve has the highest number of black bears anywhere in the state. The University of Tennessee and the S.C. Department of Natural Resources began a joint project in 2008 to determine relative densities of the coastal black bear population. Lewis Ocean Bay HP, Waccamaw River HP and Little Pee Dee HP are the study sites for this genetic research project.

During your visit, you might be eclipsed under the huge shadow of a soaring bald eagle or keep time to the rat-a-tat-tat-a-tat beat of a red- cockaded woodpecker, both federally threatened species, or pause to listen to the melodious harmonies of songbirds. Discover the beauty of rare, insectivorous Venus flytraps or pitcher-plants, native orchids, azaleas and other wildflowers that bloom in profusion in season. 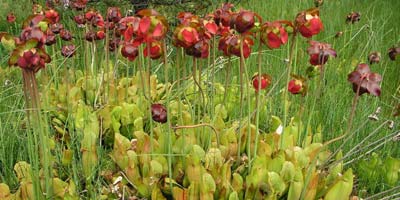 The wildlife biologist in charge of Coastal Preserve Management, urges visitors to park their vehicles and walk on the well-maintained roads to experience the preserve's flora, fauna and a wonderful sense of solitude.

Every season casts its magic. In January, wire grass and migrating songbirds are big attractions. From March through June, pitcher-plants and wildflowers provide a wonderful show. Late September through spring, songbirds abound, and, in the fall, more wildflowers, such as blazing star and meadow beauties, are prolific.

Another important feature is the Carolina Bays. Lewis Ocean Bay has 23 Carolina Bays - the largest number of undisturbed Carolina Bays in one place in South Carolina. Carolina Bays are elliptical or oval depressions of uncertain origin found in North and South Carolina, along with a few bays in Georgia, Virginia and Delaware. They are considered to be an isolated, freshwater wetland. The bay's depression fills with rainwater, usually in winter and spring, and dries in the summer months. This water level determines the plants and animals that inhabit the bay. Dense thickets of plants, such as blueberries, huckleberries, fetterbush and zenobia, cover the bays and mingle with sweet bay, catbriar, gallberry and titi. A thin canopy of pond pine and loblolly bay trees usually surrounds the bays. This kind of evergreen shrub bog is called a pocosin, an Indian word that means "swamp on a hill." Sugar-white sand rims may occur along portions of a bay or encircle an entire bay.