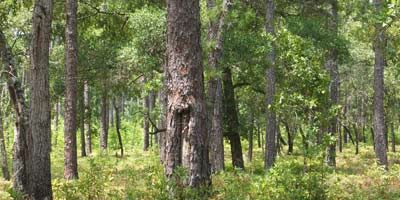 The 568-acre Cartwheel Bay Heritage Preserve in Horry County was acquired to protect one of the few known Carolina bay-longleaf pine savanna complexes in South Carolina. Carolina bays are oval or elliptical depressions of uncertain origin. Some authorities speculate they were formed by shallow ocean currents while others argue they are comet and meteor impact craters. Although called Carolina Bays, these features are also found in Georgia, Virginia and Delaware.

The preserve's bays are a type of isolated, freshwater wetland in which groundwater trapped in the bays comes entirely from rainwater. This isolated system is home to a pocosin vegetative community. Pocosin refers to dense, evergreen shrub vegetation that grows in the bay's interior. The term comes from an Algonquian Indian word meaning "swamp on a hill."

Plant species such as gallberry, fetterbush and blueberry are adapted to the wet, acidic conditions that occur in the bay's interior. The mosaic of habitat between the 150-acre Mossy Bay, several smaller bays and Cartwheel Branch produces a botanical gem. The longleaf pine savannas contain white-fringed, yellow-fringed and rosebud orchids, Venus' fly traps, pitcher plants and a bounty of wildflowers. A sparse canopy, moist soils and frequent fires provide ideal conditions for many species of herbaceous groundcover. The canopy is dominated by longleaf pine with a mixture of loblolly pine. The Carolina bays at Cartwheel Bay Heritage Preserve do not have the expansive sand rims typical of many other areas. They do have a relatively dry area of fine sand on some sides, but it is narrow. This narrow band is where the rare Wells pixie moss grows.

The preserve is an excellent birding location. Local visitors have seen as many as 13 species of warblers in one visit, including black-and white, Swainson's, Kentucky and hooded warblers, and the yellow-breasted chat. Fox and gray squirrels, white-tailed deer and wild turkey may also be seen.