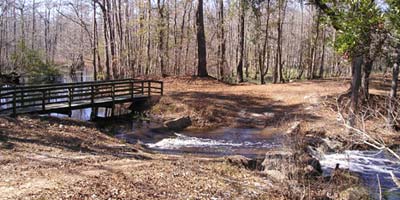 The SC Department of Natural Resources acquired the 643-acre Dungannon Plantation Heritage Preserve in Charleston County to protect one of the top nesting colonies of the federally-endangered wood stork in South Carolina. It also provides nesting and feeding habitat for numerous other birds, including osprey, anhinga, great egrets and great blue herons.

Dungannon Plantation Heritage Preserve consists of two primary habitat types: 320 acres of bald cypress-tupelo gum swamp and 323 acres of mixed upland forest. A freshwater reserve was built on Dungannon Plantation in the 1800's to supply rice fields downstream. The reserve, a bald cypress-tupelo gum swamp, provided freshwater which was sent downstream by a system of canals to reduce the salinity of water drawn from tidal creeks. The reserve now provides nesting habitat for the federally endangered wood storks, as well as ospreys, anhingas, great egrets and great blue herons.

The wood stork is a large wading bird that ranges from South America to the southern United States. They stand over three feet tall and have a wingspan of over five feet. The head and neck are naked with wrinkled skin and the body is white, except for the black trailing edges of the wings.

The wood stork breeding population in the United States occurs primarily in Florida, but increasing numbers of birds are moving into Georgia and South Carolina as Florida's wetlands shrink. The first documented nesting colony in South Carolina occurred in 1981. Since that initial colony, 8 other sites and over 1,000 nesting pairs have occurred in the state. Nesting in South Carolina generally occurs from April through June. The rookeries are colonial, with many birds concentrated in a small area. Ideal nesting habitat consists of living cypress 50-150 feet tall, with open water underneath. Standing water deep enough to prevent nest predation by raccoons is essential to the colony's success. In years when water levels are low, storks may abandon the nests.

Dungannon Heritage Preserve contains several excellent trails where the visitor can walk through the property with ease. A handicapped accessible boardwalk across the swamp is planned. Guided tours for groups can be arranged.