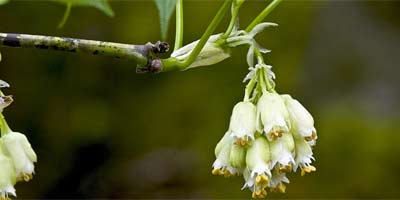 In 1959, the late Dr. Albert E. Radford of the University of North Carolina wrote a scientific paper on the discovery of a "relict plant community" in South Carolina. The paper documented an interesting bluff that he and Dr. Julian Harrison of the College of Charleston had found on Stevens Creek. Dr. Radford concluded that Stevens Creek bluff harbored a group of plants that had probably been here since the latter part of the Pleistocene or the last Ice Age.

Today, Stevens Creek bluff is part of the 434-acre Stevens Creek Heritage Preserve. This preserve was purchased by the South Carolina Department of Natural Resources (DNR) with assistance from The Nature Conservancy. On Stevens Creek bluff and in its associated coves, 15 rare plant species are found, including the Florida or Miccosukee gooseberry (Ribes echinellum), a small, perennial shrub which is known only from here and Lake Miccosukee in Florida and is listed as threatened by the U.S. Fish and Wildlife Service. The preserve is also home to Webster's salamander (Plethodon websteri), a secretive, state-listed (endangered) species rare in South Carolina. This dark brown, zigzag-striped terrestrial salamander occurs at widely scattered sites from eastern Louisiana, into Mississippi, Alabama, Georgia and into the western Piedmont of South Carolina.

As one enters the preserve from here, ridgetop forests dominated by loblolly and shortleaf pine are first encountered. Clusters of beetle-killed pines are scattered along these ridges. Beetle outbreaks are natural occurrences and are generally allowed to run their courses in the preserve. Beetle-created openings provide dead snags and downed, dead logs that increase the plant and animal diversity of the forest. Gradually, one descends the trail into ravines and to the bluff on Stevens Creek. In spring, these ravines are in flower with spring beauty (Claytonia virginica), false rue anemone (Enemion biternatum) and shooting star (Dodecatheon meadia), the latter two species rare in South Carolina. On the slopes of the bluff and on the floodplain of Stevens Creek below the bluff, an old-growth (100-200 years old) Piedmont deciduous forest is found. Here, Florida gooseberry, lance-leaved trillium (Trillium lancifolium), southern nodding trillium (Trillium rugelii), Dutchman's breeches (Dicentra cucullaria) and green violet (Hybanthus concolor), all rare species in South Carolina, grow.

Unfortunately, exotic plant species such as Japanese honeysuckle (Lonicera japonica) and Chinese privet (Ligustrum sinensis) have invaded the bluff and the floodplain of Stevens Creek. Control of these species is on-going. We welcome volunteers to help us in these invasive plant control efforts and other preserve projects.

The preserve is included in the Western Piedmont Hunt Unit of Game Zone 2. Hunting is allowed in accordance with Wildlife Management Area regulations. Plants and/or their flowers may not be collected or picked from the preserve without special permission from DNR. Please refrain from climbing on the rock outcrops; they are fragile communities.