The area is open year-round. 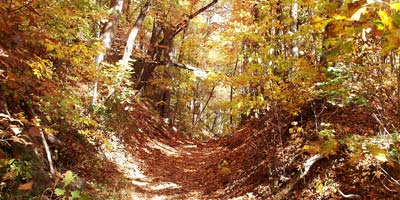 Stumphouse Mountain Heritage Preserve is the product of a large grassroots effort to secure Issaqueena Falls, historic railroad tunnels, and a forested mountainside for the public. Outcries over a proposed development lead to a groundswell of public support for conserving the area. Now approximately 440 acres of property held by the City of Walhalla is under conservation easement and this 442-acre tract to its east is dedicated as a Heritage Preserve. Issaqueena Falls (over 100 feet high) is now owned and managed by the City of Walhalla as part of a public park. Much of the City of Walhalla's property and all of Stumphouse Mountain Heritage Preserve are under conservation easements or trusts and are designated as Stumphouse Youth WMA. This was made possible by over a 1,000 private donations, the Walhalla City Council, Oconee County Council, several Oconee County landowners, and a myriad of conservation agencies and organizations including the South Carolina Conservation Bank, the SC Department of Natural Resources Heritage Trust Program, SC Parks, Recreation and Tourism's Heritage Corridor Board, the Chattooga Conservancy, the Graham Foundation, Naturaland Trust, Oconee Preservation Unlimited Stewardship Trust, The Nature Conservancy, and Upstate Forever.

The abandoned railroad tunnels on the preserve were constructed by the Blue Ridge Railroad in the 1850's, but the project was not completed. The railroad was to be a standard gauge line that would connect the city of Charleston, S.C., to the Tennessee River at Knoxville, Tennessee, and then on to the Ohio River at Cincinnati, Ohio. Attempts to revive the project in 1875, 1900, and 1940 never came to fruition.

In October 2008 a bat-friendly gate was constructed inside the entrance to the Middle Tunnel. This was done to reduce dangers to humans from falling rocks and to protect hibernating bats. The tunnel is a popular winter roost for eastern pipistrelles and is also sometimes used by the rare Rafinesque's big-eared bat. Bats are exceptionally vulnerable to disturbance while hibernating; repeated interruptions to hibernation deplete their essential fat reserves which results in poor health or death.

Forested in its entirety, with forest gaps from blow-downs, Stumphouse Mountain Heritage Preserve provides good birding opportunities for spring and fall migrants and forest resident birds. Its location on the southern front of the Blue Ridge Mountains at the interface with the piedmont is an excellent example of how geology influences bird and plant diversity. Black-throated green and hooded warblers, red-eyed and blue-headed vireos and tufted titmice will often keep late risers company. Those willing to get out early may get to see or hear Blackburnian, black and white, worm-eating warblers, ovenbirds, American redstarts, and Acadian flycatchers, depending on the season. Past heavy disturbance means you will see numerous invasive exotic plant species scattered amongst the more desirable jack-in-the pulpit, bloodroot, wild ginger, stoneroot, and piedmont rhododendron. One plant species which particularly thrives there is poison ivy; visitors should consider wearing long pants if hiking the boyscout trail in late spring and summer. In the fall the trail is heavily scented with wild muscadine, a delicious aromatic compliment to the scenic Cadmium yellow hickories and carmine maples.