Tomkins Island Seabird Sanctuary is closed to public use (no landing, no dogs, no camping) year-round. 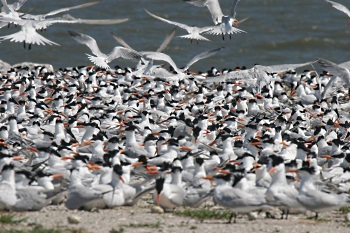 The South Carolina Department of Natural Resources owns Tomkins Island and co-manages this property with the U.S. Army Corps of Engineers, Savannah District.

Tomkins Island, located approximately 1.4 miles offshore of Turtle Island in Jasper County, became a seabird sanctuary in 2015. Construction of the island by the U. S. Army Corps of Engineers (COE) was part of the mitigation requirements for continued maintenance dredging of the Savannah Harbor, and the island was completed January 2005. Management of Tomkins Island is a cooperative effort between the U.S. Army Corps of Engineers, Savannah District and the South Carolina Department of Natural Resources (SCDNR). Both provide critical resources toward the effective management of the site. The Corps of Engineers maintains the physical aspects of the site, repairing and rehabilitating the rocks and sand that comprise the island, and controlling vegetation on the site to allow it to serve as bare ground nesting habitat for seabirds and shorebirds. Both agencies monitor bird use of the site. Species that nest on the site include: brown pelican, royal tern, black skimmer, gull-billed tern, sandwich tern, laughing gull, and American oystercatcher. It has had over 11,000 tern nests in one year. In addition to providing nesting habitat, Tomkins Island serves as a winter loafing area for seabirds and shorebirds. Also horseshoe crabs spawn on the beach and thousands of migrating shorebirds feed on this spring food resource.

To allow Tomkins Island Seabird Sanctuary to provide the habitats for which it was created, public access is prohibited all year. At all times of the year, only human visitation that is approved by SCDNR or the COE, Savannah District is allowed. Visitors must possess, on their person, written permission from either SCDNR or the COE, Savannah District.