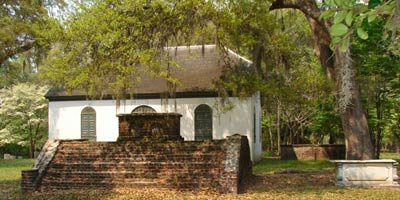 The photograph above is of Strawberry Chapel which is a part of the original township but is privately owned and is not open to the public.

Started in 1707, Childsbury and the adjacent Strawberry Landing (est. 1705) are examples of an early frontier settlement away from the Port of Charleston. The area has been described as the "apex for commerce along the Cooper River." As such, it is an important site for interpreting early contact between Native Americans, African Americans and Euro Americans. Significant features include a ferry landing, shipwrecks, homes, a tavern to serve the ferry, a racetrack, a free school and a general store. Numerous tradesmen, including carpenters, butchers, a tanner, shoemaker and doctor were present on the site. The adjacent chapel and tavern continued in use after 1750 and fairs were held until the mid-1750's.