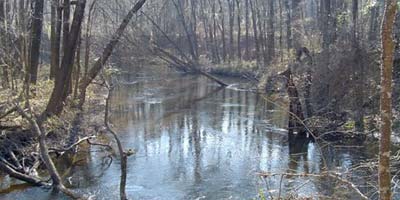 Bountiful wildlife, sunlit dappled forest paths and 12,000 years of history and pre-history are tucked away in a pristine setting at Congaree Creek Heritage Preserve, just a stone's throw from downtown city lights. The 627-acre preserve, owned and managed by the S.C. Department of Natural Resources, borders the Congaree River and Cayce, S.C.

Archaeologists have found tools, pottery sherds, arrowheads and other evidence that people have lived in and around the preserve for nearly 12,000 years. A nearby road that runs through part of the preserve is part of the Old Cherokee Trail which led from the Appalachian Mountains to the coast.

Projectile points found in the area indicate it was an Indian gathering place about 10,000 to 12,000 years ago. From a dig on adjacent property owned by SCE&G, there is evidence of people living there 2,500 years ago, as well as a home site from the 1760s.

The Indians who once lived there "were probably hunter-gatherers of 20 or 30 who moved around 10,000 years go," says Sean Taylor, archaeologist for the DNR's Heritage Trust Program. "They didn't stay for long so they didn't generate much trash. The people were mobile."

In the winter months, perhaps 450 or so people gathered in this area for two or three months to mate, perform ceremonies and so forth before heading down the Congaree River.

The first Anglo-Saxon settlement at Fort Congaree was established in 1718 on the Congaree River. The community of Saxe Gotha Township was founded in 1731. Fort Granby was established in the Revolutionary War era. On adjacent property, earthworks remain where Confederate soldiers dug in as Gen. Sherman's troops marched to Columbia on February 14, 1865. The Confederates burned the bridge to Columbia to prevent the federal troops from entering the city.

Beginning in the early 1900s, clay was dug from pits for the Guignard Brickworks, with peak production in World War I. The clay pits now form several ponds, home to all kinds of wildlife.

Hikers can walk an easy 2.5-mile trail loop in about 1.5 hours and view ponds where duckweed and lily pads flourish and teem with wildlife, including an occasional, elusive alligator. Seven bridges and one bench recently were added to the trail. The area is also home to a variety of snakes, turtles, bobcats, deer, hogs, hawks, water fowl and other birds. At one time, this 70-year-old hardwood forest was farmlands. A parking area is available on the right of Old State Road just before the pavement ends.

The White House designated the Guignard Brickworks Trail, which runs through part of the preserve, a Community Millennium Trail. This trail, as do dozens of Millennium Trails throughout the nation, reflects community history through natural settings. DNR plans to develop miles of walking and canoe trails through the property, as well as interpretive areas and benches along the way.

Each year, the canoe trail is cleared by Brian Long, DNR Staff - Cultural Preserve Manager, and members of the Stewardship Committee. If you would like to volunteer, please contact Brian Long at 803-609-7057 or longb@dnr.sc.gov.