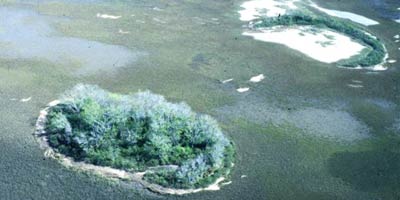 Owned and managed by the SC Department of Natural Resources, the Daws Island Heritage Preserve is a 1,881-acre property located in Port Royal Sound, in Beaufort County. Bounded on the east by Broad River and the west by Colleton River, Daws Island Heritage Preserve can only be reached by boat. Acquisition of the Preserve was made possible by a grant from the US Fish and Wildlife Service's Coastal Wetlands Improvement Act Program, a substantial donation from the Daws Island Partnership and funds from the DNR's Heritage Land Trust Fund.

Daws Island was acquired because it contains a number of prehistoric archaeological sites known as shell rings. The shell rings are mounds, rings and crescent-shaped deposits of oyster shells and garbage constructed about 4,500 years ago by Native Americans. The shell rings harbor important information that archaeologists can use to reconstruct coastal diet. They also yield good data for prehistoric environmental reconstruction. The function of the rings has yet to be verified, but hypotheses such as habitation sites and ceremonial sites have been proposed by researchers. Evidence of prehistoric use of the island from 12,000 years ago to about 800 years ago has been revealed at various locations on the preserve.

Due to sea level rise, these deposits are surrounded by marsh, are hard to get to and are also sensitive roosting and nesting areas for various birds. Visitation is not advised.

Daws Island is a featured attraction for the Port Royal Sound Kayak Trail, which includes a number of natural and cultural heritage preserves and other interesting sites.

Most of the high ground on Daws Island contains sensitive archaeological deposits. Artifact collection, digging and metal detecting are not allowed on the preserve.