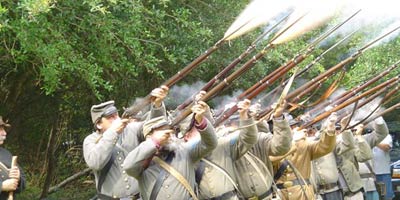 They call it hallowed ground - a spiritual place where history, steeped in the marshes and forest, comes alive with every step along the trail.

Owned and managed by the S.C. Department of Natural Resources, Fort Lamar Heritage Preserve is located on 14 acres in Charleston County and has been documented as the second most important Civil War site in the state. Thousands of people visit Fort Lamar Heritage Preserve on James Island throughout the year, and annually, on the closest weekend to June 16, many attend a commemoration at the preserve to observe the Battle of Secessionville. At this site, on June 16, 1862, Confederates, outnumbered three to one, defeated Federal soldiers in a fierce battle that saved Charleston and set the stage for three more years of fighting in the Civil War. Tower Battery, as Fort Lamar was initially called, was manned and being completed by the 1st South Carolina Artillery, commanded by Col. Thomas G. Lamar. The battery was completed in the spring of 1864 and named Fort Lamar in his memory. The battle began at 4 a.m., with 3,500 Federal troops attacking 1,250 Confederate troops at Tower Battery. But the Federal troops could not cross the marsh and got stuck in the pluff mud. By the time they retreated three hours later, Federal casualties included 107 killed, 487 wounded and 89 missing. On the Confederate side, 54 were killed, 144 wounded and eight were captured or missing.

Hikers may obtain information at the kiosk in the parking lot for the self-guided trail, about a half-hour easy stroll. "You can stand inside the fort and you are standing in a cradle of history," according to State Senator Glenn McConnell. "You can look out at the marshlands and very quickly imagine what went on there. You can experience the silence and the sounds of nature."

Barry Gooch, who has taken part in reenactments at the preserve, says they are a memorial service for both sides. "We're all pretty spiritual about this, and have respect for those who went before us," he says.

Many stories still are recounted, like that of the Campbells, Scottish brothers who fought that day on opposing sides. They never encountered each other and both survived the war. Another is that of a Confederate officer whose slave died fetching his pistols. The officer also died that day. They are buried side by side.

Gooch, like others, also visits the preserve during the year because of a sense of peace, tranquility and connectedness. "The most special part is that people thought enough about this place to preserve it," Gooch says.

None of the trees are older than the battle, fought on farm land. Now, there are towering live oaks, yaupon hollies, bay berries and pines. Salt marsh life abounds, as well as all sorts of birds, including red tail hawks.

John Jowers, who lives about a block away, is the official "provost" of the preserve and one of the volunteers who visits daily to help maintain the grounds. Jowers says a favorite time is at dawn, with the sun rising over the slough and the first birds moving about and singing. Then, he says, "it's just like going to church."