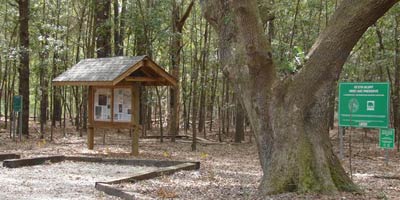 Shell rings occur along the coast and are close to tidal creeks. They were created during the Late Archaic Period 5,000 - 3,000 years ago. Archaeological work indicates that during this period, human groups made extensive use of coastal resources, particularly shellfish. The remains of the shellfish, along with refuse from other human activities, form midden deposits from which archaeologists can reconstruct past human activities and environments.

Of the four shell rings owned and managed by the SC Department of Natural Resources, South Bluff is the only one that can be reached by land. It's an upland area containing a well-developed maritime forest community with dominant species including live oak, cabbage palmetto, loblolly pine, wax myrtle, yaupon holly, and switchcane. South Bluff provides habitat and protection for a variety of wildlife species including resident and migratory birds, game and non-game mammals and reptiles and amphibians.