The area is open during daylight hours year-round. Camping prohibited. 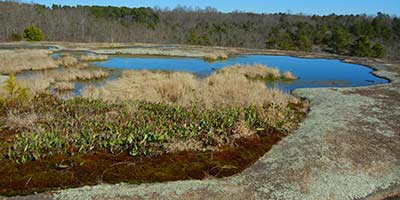 Standing atop the gigantic granitic rock, you feel on top of the world, or close to it.

On a clear day, you can seemingly see forever from the crest of Forty Acre Rock in Lancaster County, where the Sandhills meet the Piedmont.

The rock seems bigger than life, larger than its actual 14 acres. The entire Forty Acre Rock Heritage Preserve encompasses 2,965 acres of the most diverse protected area in the Piedmont region, including granitic flatrocks, waterslides, waterfalls, beaver pond, caves, hardwood and pine forests, and a variety of wildflowers and wildlife. The Forty Acre Rock Heritage Preserve & Wildlife Management Area is designated as a National Natural Landmark.

"There's a grand open feeling on the rock," says former preserve manager, Jim Sorrow. The huge rock is not entirely barren. During the wet winter and early spring months, water collecting in crevices or depressions on the rock's surface creates vernal pools, where plants, such as the rare Pool Sprite, flourish.

Mosses and lichens thrive there, too, and a few Eastern Red Cedars rise up like gnarled sentinels from shallow soils over the granitic floor. One small red cedar that recently died from the drought turned out to be about 200 years old - a grand age for such a small tree. Its slow growth was a result of life in the harsh conditions. Every season yields its own special beauty here.

"The best time to see this place is late March," Sorrow says. "The spring wildflowers provide a main color rush. Fall is a pretty time, too."

In the spring, the bright purple compass plant and wild azalea bloom and in summer months, butterflies flock to the yellow false foxglove and other wildflowers.

Autumn's riot of colors of wildflowers and turning leaves fades into the winter months, but before winter's end, bloodroots, trout lilies and other plants are popping up.

Nearly a dozen rare, threatened, or endangered plant and wildlife species are protected here, including nodding trillium and the green violet or hybanthus. Blue cohash, usually found only in the mountains, grows in the preserve. Longleaf pine and turkey oak, trees typical of the Sandhills, are here, too.

From the rock, hikers can follow a trail to explore more of the preserve, but should note that wet rock and loose gravel can make the trails slippery. Watch out for big roots and rocks in the path, or an occasional downed tree, and remember to stay on the trail, which leads to a waterslide and cave. Listen for the music of water trickling over rocks. Songs of birds, such as tanagers, warblers, vireos, and the drumbeat of woodpeckers also can be heard.

The first of several bridges crosses a sandy-bottomed stream, where you might spy tiny fish or splashes from frogs jumping into the water. Watch for tracks of deer, gray fox and bobcats.

The trail leads to the beaver pond, covered with a blanket of lily pads.

Forty Acre Rock is a popular destination. Sadly, visitors have spray-painted graffiti on some of the rocks and have driven four-wheelers into the preserve, damaging fragile habitat. Motorized vehicles, bicycles and horses are not allowed. Fires, camping, littering and alcoholic beverages are prohibited. The preserve is open during daylight hours. Painting the rock is illegal and violators will be prosecuted.