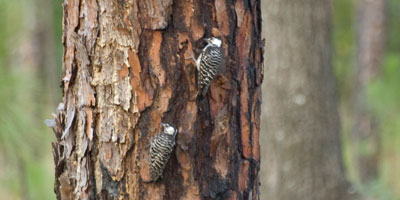 The main elements of concern on the preserve are two federally-endangered species, the Red-cockaded Woodpecker Picoides borealis and a rare wetland plant, Canby's dropwort Oxypolis canbyi.

In the period between the Wisconsin glaciation (ca. 12,000 years before present) and European settlement, fire-dependent longleaf pine ecosystems became the most extensive ecosystems in the southeastern United States. Longleaf occurred on about 90 million acres, and dominated about 60 million acres. Today, because of fire suppression and harvesting without replacement, only about 3 million acres remain. Longleaf forests, although dominated by a single canopy tree species, are one of the most biologically diverse ecosystems outside the tropics.

The preserve's seasonally-wet longleaf pine forest has subsisted because of periodic fire. DNR staff with assistance from the SC Forestry Commission conduct prescribed burns on the preserve to mimic natural fires.

Several fallow agricultural fields lie on the preserve's high ground. These fields were once part of the longleaf savanna, and have been replanted in longleaf pine.

Four active groups of Red-cockaded Woodpeckers (RCW) are found on the longleaf savanna. This bird is rare because of habitat alteration.

The RCW is a bluebird-sized, black and white, ladder-backed woodpecker with salient white cheek-patches. The RCW's moniker derives from a very small red patch, or cockade located on the back of the male's head. The bird is endemic to the pine forests of the southeastern United States, where it excavates roosting and nesting cavities exclusively in park-like stands of old southern yellow pines (P. spp.). Aggregates of these cavity trees are called clusters.

Individual groups of woodpeckers maintain year-round territories around clusters. Groups consist of a breeding pair, and 1-4 helpers which are usually sons of the breeding male. The helpers assist the pair in incubating the eggs and feeding the brood, and with cavity excavation. Only 1 brood is raised per group per year.

The birds feed primarily on insects found by prying loose bark from living pine trees rather than by drilling into dead trees like other woodpeckers.

The preserve is open to visitation, including hunting. For more information on hunting see the DNR's Hunting Rules and Regulations.