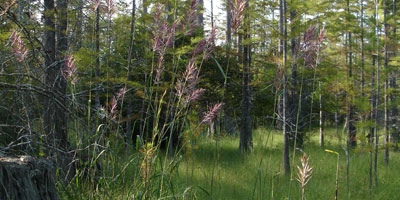 Owned and managed by the SC Department of Natural Resources, Savage Bay Heritage Preserve is named in honor of Henry Savage, a noted naturalist, former SCDNR Heritage Trust Advisory Board member, and author of The Mysterious Carolina Bays. The SCDNR purchased the preserve, located in Kershaw County, in 1985 from The Nature Conservancy using Heritage Land Trust Funds. The original 59 acres at Savage Bay were dedicated as a heritage preserve in 1987. Since that time, seven additional property acquisitions have increased the size of this preserve to 110 acres.

Savage Bay Heritage Preserve is an example of the Carolina Bay phenomenon. Carolina bays are elliptical or oval basins found throughout the Atlantic coastal plain. The vast majority of these basins are found within North Carolina and South Carolina. Actually wetlands that vary greatly in size, Carolina bays range from less than an acre to several hundred acres. Carolina bays support abundant wildlife and several rare, threatened and endangered plants and animals.

Savage Bay Heritage Preserve is located in the Fall Line sandhills region. Approximately half of the preserve consists of Carolina bay habitat, while much of the remaining habitat is comprised of old agricultural fields. Pines and broomsedge are the dominant vegetation. Remnant sandhill habitat is found adjacent to both bays, typified by longleaf pine and scrub oak, with prickly pear and Georgia bear grass (rare in South Carolina) present as ground cover plants.

Two Carolina bays are located on Savage Bay Heritage Preserve. Both bays have pond cypress as a dominant canopy species. The smaller bay is filled with shrubby vegetation, including fetterbushes. The large bay shows zonation of plant communities typical of many bays. A dense "rim" of vegetation, including fetterbushes and blueberries with catbriar interwoven throughout, grows along the outer margin. The interior of this bay is open. The canopy is dominated by pond cypress. The shrub layer, dominated by myrtle-leafed holly, has some black gum as well. The rare shrub pond spice is found just within the dense rim in the pond cypress community.

The larger bay is flooded during wet years, but dries completely during drought summers. Due to the flooding-drying regime of this bay, very little diversity occurs in the herbaceous vegetation layer. Red-root and various grasses and sedges are present when the bay is dry.

This heritage preserve was established because it harbors unique plant and animal life as well as other significant natural features. It is important to treat this preserve with care so that future generations may enjoy it as we do now.