Hunts are conducted on selected dates during the waterfowl season.

This is a Category I waterfowl area.

This property is not owned by South Carolina Department of Natural Resources, but is part of the leased lands management program. 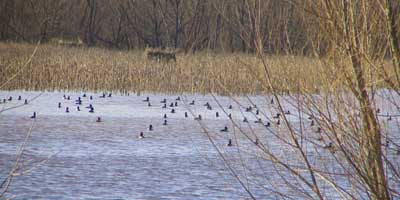 Broad River Waterfowl Management Area was established in the late 1970's as a mitigation project for SCE&G when Parr dam was raised to enlarge Parr Reservoir. The S.C. Department of Natural Resources manages this land which is owned by SCE&G. Located in Fairfield County, the area initially included only one impoundment of about 40 acres. Building projects have increased the number of impoundments to five, totaling about 130 acres. One impoundment is a greentree reservoir with a total oak canopy. The other impoundments are planted in corn or millet. Over 500 acres of the remaining area are either upland or uncontrolled backwater. Waterfowl hunting is the main recreational use of the area. Broad River Waterfowl Management Area is a category 1 area and hunts are held one day per week during duck season. Traditionally, hunts are held on Saturdays. The main duck species harvested are Ring Neck, Wood Duck, Mallard and Green-Winged Teal. Mallard was the main species present for many years but their numbers have decreased due to flyway migration changes. A wide variety of other duck species are present.

Other recreational activities include bird watching, fishing, archery deer hunting and small game hunting. The area is open to public access from Feb 9 through October 31. The small size of the area requires closing public access during most of the winter because disturbing the migrating waterfowl causes them to abandon the site.

In addition to waterfowl, the area has many wildlife species associated with wetlands and rivers. Several types of wading birds visit the area year round. Mammals include deer, bobcat, fox, coyote, muskrat, rabbit, raccoon and others. Various hawk species reside on the WMA or migrate through. An active bald eagle nest is nearby and the eagles are regular visitors to the area.