The area is open only during daylight hours. 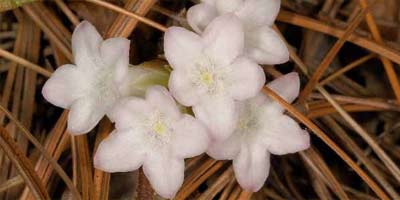 It's a mountain-top experience where the rolling foothills of the Blue Ridge Mountains meet. Peak elevation rises to 1,769 feet at Buzzard Roost Heritage Preserve near Walhalla. In the winter months, deciduous trees drop their leaves to give hikers a clear view of the surrounding foothills. In the spring, visitors can delight to the blooming mountain laurel and rhododendron.

The 70-year-old or so forest on the 501-acre preserve includes the Virginia pine and the rare Table Mountain pine. In the fall, hardwoods, such as scarlet, black and chestnut oaks and mockernut hickory, paint a kaleidoscope of color. In summer months the palette includes feathery green ferns and colorful wildflowers, such as brown-eyed Susans and butterfly pea, which bloom in profusion.

The heritage preserve hosts a number of endangered plant species, including the federally-endangered smooth coneflower (Echinacea laevigata), which blooms in late May and early June in colors ranging from white to purple, with the most common shade, pink. Portions of the preserve are periodically burned for the benefit of the smooth coneflowers.

Dr. Billy Campbell and his wife donated a portion of Buzzard Roost Heritage Preserve. Another portion of the preserve was purchased with help from The Nature Conservancy. The property includes some low grade marble outcrops that harbor unique fern species and erode slowly to contribute to near neutral pH soils, which in turn give rise to the special coneflower habitat. The preserve backs up to National Forest Service land.

In addition to the preserve's flora, it harbors an abundance of birds. Bird watchers should bring binoculars to spy woodpeckers, warblers and rose-breasted Grosbeaks. Black and Turkey vultures also roost on the preserve occasionally.

Tucked away from mainstream traffic, the preserve is rather obscure, but once you find it, you'll likely think it's well worth the trip. Plan to leave early in the day so that you can spend some time there.

Hunting on the preserve is permitted in accordance with Game Zone 1 regulations. The preserve is open only during daylight hours and no plant, nongame animals, natural or cultural materials may be disturbed or taken. Camping, fires, littering, alcoholic beverages, motorized vehicles, bicycles and horses are prohibited.