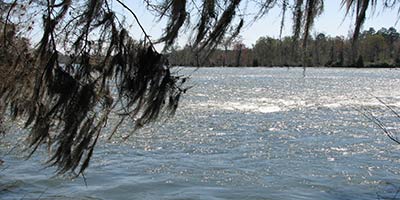 The 83.84-acre Savannah River Bluffs Heritage Preserve is just outside the city limits of North Augusta in Aiken County. The preserve has 1,076 feet of river frontage on one of the few remaining river shoals of the Savannah River. These shoals harbor the rare Rocky Shoals Spider Lily. The river also has rock formations that may be remnants of ancient Native American fishing weirs.

The foot trail was built to facilitate public use of the preserve. The trail parallels a stream to the river bluffs, then follows an old logging road back to the power line. The trail passes rock formations, the Savannah River, and interesting forest and plant communities.

The Savannah River corridor brings the habitat of the coastal plain into the piedmont of South Carolina and Georgia. Spanish Moss, Bald Cypress, and Dwarf Palmetto lend coastal flavor to the area.

The property preserves a piece of South Carolina's natural heritage, including habitat for some very rare plants, such as Relict Trillium, which is on the federal endangered species list. Bottle-brush Buckeye, Upland Swamp Privet, Yellow-wood, False Rue Anemone, and other rare or special-status plants also grow here.

Fishing is allowed along the Savannah River.