Heritage preserves are open for public use from one hour before sunrise to one hour after sunset. 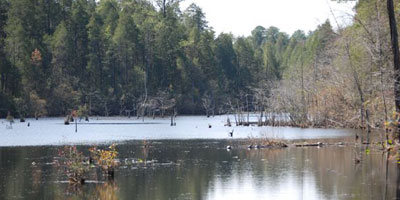 Shealy's Pond Heritage Preserve covers 62 acres in Lexington County and is centered around an old mill pond and associated wetlands on spring-fed Scouter Creek. County Road 279 crosses the dam of the mill pond, which covers about six acres. The preserve also includes approximately six acres of sandhills on the west side, which is forested primarily in longleaf pine and turkey oak. The remainder of the tract is an Atlantic white cedar bog surrounding the mill pond that supports several rare plant species. This is one of only three known localities for the globally rare Rayner's blueberry.

Atlantic white cedar is an aromatic evergreen tree, 50 to 80 feet tall and one to four feet in diameter, with a conical crown of slender, often pendulous branches. It occurs in a narrow belt along the Atlantic Coast from southern Maine to northern Florida, and along the Gulf Coast to southern Mississippi.

Lack of adequate regeneration has decreased the acreage of Atlantic white cedar in the Carolinas by at least 90 percent since the early 19th century. The stand at Shealy's Pond is one of the best in the state. Much of it is over 150 years old. The preserve's Atlantic white cedar forest filters and purifies water flowing through it and helps stabilize streamflow by storing floodwater and mitigating the effects of drought.