South Fenwick Island is open to the public during daylight hours (1 hour before legal sunrise to 1 hour after legal sunset).

Primitive camp sites are available on the island year-round, except during archery season (Oct 1-10). Camping permits are required and available by calling the McKenzie Field Station at (843)-844-8822.

Archery hunting permitted from October 1-10 by permit only. Permit available through the McKenzie Field Station by calling (843)-844-8822. 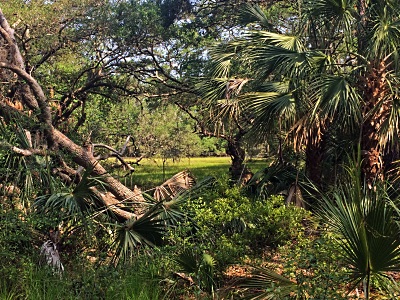 South Fenwick is located several miles from the Atlantic Ocean in the heart of the ACE Basin, one of the largest undeveloped estuaries on the east coast. Bounded on one side by the South Edisto River and on the other side by the Ashepoo River, the 500-acre island (of which SCDNR manages 400 acres) is connected by a maze of salt marsh to Otter Island. With a mix of maritime forest, salt marsh, and open, former agricultural lands on the property, South Fenwick is home to a range of wildlife, including white-tailed deer, wild turkey, raccoons, Eastern diamondback rattlesnakes, and a variety of songbirds, waterfowl, and wading birds.

Like many Lowcountry sea islands, South Fenwick has a rich history. Through the colonial and antebellum periods, the island was home to indigo and cotton plantations. After the Civil War, a small Gullah-Geechee community farmed and fished on the island for nearly a century. South Fenwick and North Fenwick Islands were formerly just one island - but in the early 1900s, the U.S. Army Corps of Engineers dredged a canal connecting the South Edisto and Ashepoo rivers for the Intracoastal Waterway, dividing the island in two. Today, the South Fenwick Island has no full-time residents, but a number of other private landowners still hold property there. In August 2017, the South Carolina Department of Natural Resources (SCDNR) purchased a portion of South Fenwick Island from the Nature Conservancy, adding the sea island property to other public lands in the ACE Basin.

South Fenwick Island can only be accessed by boat. The primary access point is an SCDNR-marked dock on the Ashepoo River with limited tie-up space, which will be open to campers and day-use visitors. There are no facilities on South Fenwick, so visitors should be prepared for primitive conditions and plan to carry away any waste they produce for disposal on the mainland. Four trails offer visitors a chance to explore the property's inland maritime forest and salt marsh views.